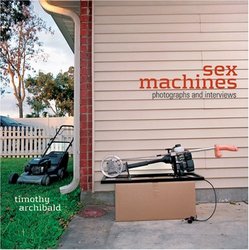 Sex Machines: Photographs and Interviews unveils an astonishing American subculture and the homespun inventors and users who propel it. Meet a laid-off tech industry exec who transforms a thrift store pasta maker into a high-powered sexual appliance and a new career; an apocalyptic visionary who builds a sex machine prototype for female survivors of a future without men; and an Idaho cowboy who intends to use his device as a form of Christian-based marriage counseling.

Sex Machines celebrates the spirit of American ingenuity and bold approaches to an ever-changing sexual landscape.

Timothy Archibald’s photographs have appeared in New York Times Magazine, Newsweek, GQ, The New Yorker, and Outside Magazine, and in ad campaigns for Apple Computers, Eastman Kodak, and IKEA. Archibald lives in San Francisco with his wife, Cheri, and two sons, Elijah and Wilson. Sex Machines: Photographs and Interviews is his first book.

“Without question, this is the perfect Christmas gift for the jaded know-it-all who thinks American ingenuity is on the decline.” — NightCharm.com

“The book is…more about sociology than sexuality; the images aren’t pornographic, and the stories of these tinkerer’s lives and obsessions are fascinating.” — Xeni Jardin, boingboing.com

“Hilarious, mind-blowing and weirdly inspirational, Sex Machines lifts the garage door on a secret world of suburban lust. If Popular Mechanics had done an Alfred Kinsey issue, it might have looked like this. Destined to be a classic.” — Jerry Stahl, author of I, Fatty and Permanent Midnight

“This lovely little book tells you more about what America and Americans are really all about than anything you’ll find in Hollywoood movies, on network television, or in the New Yorker, Time, or Newsweek. An appliance manual with real relevance.” — Gary Indiana, author of The Schwarzenegger Syndrome: Politics and Celebrity in the Age of Contempt