A Story of Intoxication, Love & Death
The Extra-Illustrated & Annotated Edition of the 1897 Original 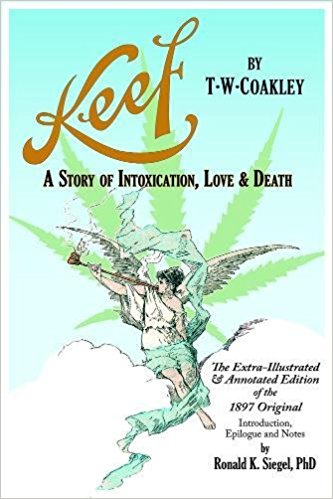 “Everything one does in life occurs in an express train racing toward death. To smoke [Cannabis, marijuana, opium] is to get out of the train while it is still moving. It is to concern oneself with something other than life or death.” -Jean Cocteau

Among the native tribesmen in the Rif region of Morocco who have been smoking a cannabis preparation known as kif for over 800 years, it is accepted as part of the magic and sorcery in everyday life. This seemingly supernatural effect is neither physical nor psychological. Rather, it is an unconscious cognitive process involving perception, thinking and learning. The cognitive process was given the name “Kif Wisdom.”

In Timothy Wilfred Coakley’s novel Keef: A Story of Intoxication, Love & Death, written in the witchy style of an Edgar Allan Poe horror story, the narrator, a kif smoker, takes us through his supernatural search for love powered by his “Kif Wisdom” growing from his chronic smoking. At maturity, the wisdom allows him to see that the path to love goes beyond death.

Coakley’s novel, in the form of an illustrated memoir, was heralded as one of the most important publishing events of 1897. It made the list with H.G. Wells’s The Invisible Man and Rudyard Kipling’s Captain Courageous. Since average marijuana potency is now approaching kif levels, this book about toxic kif experiences may more applicable to today’s audience than those of 1897.

Dr. Ronald K. Siegel is a psychopharmacologist and former research professor at UCLA School of Medicine, author of several books including the acclaimed Intoxication, numerous journal articles based on translations of lost and forgotten works in drug literature, and currently curator of the RKS Library of Drug Literature.