Letters from a Deathrock Cutter 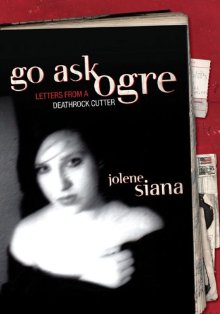 Teenage hell has never been captured with such intense honesty as these actual letters sent in the late ’80s from a desperate girl to the singer of her favorite band.

Go Ask Ogre peers into the world of a misfit “cutter” who lives with an abusive mother in the rust belt. A tailspin of suicidal depression and self-injury leads her to write Ogre, front man for the industrial rock band Skinny Puppy. Soon he receives a flood of elaborately illustrated letters and journals filled with Jolene’s most intimate thoughtsfrom her most painful secrets to hilarious observations and lucid realizations about her life and those around her.

At a concert, Ogre confides to Jolene that he has saved all her letters. Nine years later, a box from Ogre arrives at Jolene’s door. Re-examining the documents, she realizes that writing these letters had saved her life.

Go Ask Ogre compiles Jolene Siana’s actual letters, artwork, illustrations and ephemera into a unique and powerful story of an extremely troubled teen who made it through the worst years of her life, and, through the power of music and art, transformed herself in the process. Lavishly illustrated and full color throughout.

Jolene’s beautifully crafted book shines with empathy & humility. It is the first time, in my opinion, that simultaneously musicians are reminded of their fan’s humanity, and fans reminded of musicians’ humanity. — Chris Connelly

“This book made me wanna paint my nails black and write “Skinny Puppy”
in ball-point pen on my jeans, which is weird because I don’t even
really like that band.” — Lesley Arfin, author of Dear Diary

“The dozens of letters show an unmistakably teenage voice asking teenage things, but also an intelligent, jarringly lucid evocation of a journey through post-prosperous America and a struggle to find out what it means to be alive.” — Brian Joseph Davis, THIS Magazine

“Jolene Siana is to be thanked and lauded for many things already in her young career; number one is for rendering Go Ask Alice completely useless.” — Hardcore Ink

“It’s easy to bill this book as a memoir of teen-aged angst and mental illness; but Go Ask Ogre is so much more, and so much better than that. Jolene Siana’s story is one of survival, and of rising out of the depths of a personal hell largely through the power of self-expression. It’s also about the vital role that art can play in our lives, both as audience, and through our own practice of it. It’s sad, funny, truthful, good-hearted and genuinely moving.” — Jaime Nichols, blogcritics.org